The End of Europe

The 5 ways Europe will collapse

Europe is facing so many crises it’s hard to keep up. Figuring out which particular problem will cause the EU or euro to collapse is like watching a game of Russian Roulette. You can’t help but flinch every time. And you’re missing the real point – something will go wrong eventually. It’s only a matter of time. The end of Europe and the collapse of the euro are inevitable.

The only way to escape is to stop playing the game. That’s why Brexit is so important. But that’s another story.

The different problems Europe faces are of course connected. But you need to understand them to protect yourself from the consequences. All these crises will affect Britain too. And that means you.

Let’s take a look at each one of Europe’s five potential crises.

Eurostat’s optimistic expectation is that the European workforce will decline by 0.4% a year until 2040. This is optimistic because it assumes a far higher workforce participation rate than we currently have, despite a rapidly ageing population. It also assumes continued high levels of immigration, and we know how that’s working out. Still, losing about 9% of your workforce over the next 23 years is enough of a nightmare.

But it gets worse. The continent is losing young workers and gaining retirees at a record pace. Europe’s 20 to 40 age bracket is on target to shrink by about a fifth in the 10 years to 2020 according to Deutsche Bank. So after 2040, the trend of a falling workforce will speed up.

The real issue is that Europe isn’t a single demographic bundle. Several countries are in deeper demographic trouble than others. And that will cause contagion for those who are facing the same fate, just several years later.

Only one country in Europe is experiencing natural population growth – Kosovo. About nine months ago I saw a queue outside an outhouse in the middle of a field in Kosovo. Other than that, I saw nothing to hint Kosovo is experiencing a demographic boom which will counteract the decline in the rest of Europe.

In my birthplace, Germany, the dependency ratio will hit 1:1 in 2030. This means there’ll be one worker for every person not employed. We Germans are an efficient bunch, but that’s asking a bit much.

If the economy breaks down in Germany, the rest of Europe will be in trouble too.

Europe’s debt crisis of 2012 isn’t over. Banks and governments are not on a sustainable path. Eventually the issue will come to a head again.

Italy’s banks are the favourite when it comes to the trigger for Europe’s next financial crisis. Tim Price from the London Investment Alert has been tracking the problem that’s come to be known as “Le Sofferenze”. Here’s how Tim put it in a recently published warning on the fate of the European project:

“Le Sofferenze” is what the Italians are calling their banks’ bad loans.
It means “the suffering”.

These non-performing loans are now so big they are stifling any hope of a banking recovery.

It all comes down to the country’s failing economy, which is still 8% smaller than it was BEFORE the 2008 financial crisis.

The chart below reveals the scale of the problem. Le Sofferenze now account for 18% of all loans. 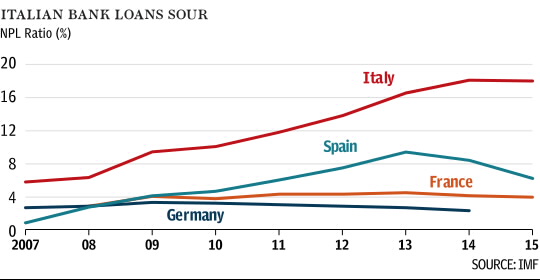 To put that in context, Britain’s banks’ “bad loans” amount to less than 1.5% of their total. The global average is 4.3%.

And the problem is getting worse at a frightening speed: in the last five years, the sum of non-performing loans has increased 85%. The total now stands at €360 billion.

Let me repeat that: Italian banks have taken on 85% more “bad debt” in the last five years alone.

So imagine the financial chaos, social unrest and negative impact of the last crisis all over again – and perhaps even worse.

Italy’s banks are big enough to dwarf the Greek crisis. Which also threatens to make a comeback.

And it’s not just Italian banks. Major French and German banks were found to lack capital in stress tests. When Spain’s Banco Popular was exposed, its share price fell 25% in one morning.

Crisis number 3: downfall of the EU

2017 and 2018 were the years Europe’s problems manifested themselves at the polls. There were several clear-cut opportunities for the people of Europe to send a message – or a shockwave – through the heart of the European political establishment. Brexit was only the beginning. The EU is in danger.

In mid-march, the Eurosceptic PVV party gained a further five seats with 13% of the vote. In the Netherlands’ fractured parliament, that puts the fiery Gert Wilders’ party in second place.

On April 23rd, France voted for its new president. Marine Le Pen’s vote was a barometer of anti-Europe sentiments in France, and they’re running hot. For a moment the also anti EU and euro Melenchon was feared to make round two, leaving France with two anti-EU options.

In October 2017, German elections left a Eurosceptic party as the main opposition. The Alternative fuer Deutschland now has an important role to play in governing Germany. Not to mention leaving the government itself hamstrung with an impossibly broad coalition. Angela Merkel is already pulling on the reigns of the EU.

In April 2018, Europe’s biggest problem child voted too. All of Italy’s major political parties are Eurosceptic to some degree now. And those with the fieriest rhetoric won the most votes. As former US Treasury secretary Lawrence Summers put it, “if an anti-euro party comes to power in Italy, this could be the beginning of the end of Europe and the eurozone”.

Hungary also went to elections around the same time. This is one of the most openly Eurosceptic nations and was one of the few willing to incur the EU’s wrath by closing its borders during the refugee crisis. It could lead an anti-EU charge from within. And that’s looking even more likely given the EU will reshuffle funds out of Eastern Europe and into Southern Europe after Brexit.

The real wildcard isn’t even in the EU. Turkey is holding the Union to ransom by threatening the release of several million refugees. President Erdogan wants the EU to stop meddling in his affairs, while accepting Turkey’s demands for membership.

Next year, EU elections themselves will take place. If the EU parliament features as many Eurosceptics as national parliaments do, the whole institution could become untenable.

Crisis number 4: inflation breakout in half of Europe?

Inflation is a spectre that hasn’t haunted Europe for a very long time. But there are signs it’s back when policymakers are least expecting it. With a cruel new twist.

In some parts of the Eurozone, inflation is well above the 2% target. But here’s the problem. Inflation in other parts of Europe is still well below target. And that means the ECB is stuck between a rock and a hard place. If it increases interest rates to rein in inflation, it will sabotage the economies of countries with low inflation. If the ECB continues its loose monetary policy, inflation will get even further out of hand in the strong economies.

Good luck picking one of the two.

Crisis number 5: the end of the euro

Just as the Eurozone is stuck with a single monetary policy, it is also stuck with the same exchange rate. Thanks to a falling pound, Britain is weathering Brexit well. Countries inside the Eurozone don’t have the same pressure valve. That’s making the currency very unpopular.

In January Marine Le Pen proposed a new currency regime in Europe. Italy’s opposition parties want to leave the currency. Popular movements are underway in Greece too. Even mainstream economists have been calling for changes.

If countries start to leave the euro, that’s a major blow to the European Union project as its leaders envision it. Economist Roger Bootle had to say on an imminent Italian departure:

“My view is that Italy is more likely to leave the euro within the next year or two.

“The boost that this would give to Italian competitiveness would see Italian GDP recover and this would prompt other southern countries to leave. Before long, the euro would be in tatters.

“Could the EU itself survive the collapse of its greatest project, along with the consequent recriminations and financial wranglings between Germany and the southern members? I doubt it.”

In an opinion poll of the world’s central bankers, many admitted reducing their exposure to the euro and increasing pounds. They cited political instability as the reason, fearing for the very future of the euro.

How does Russian Roulette end?

Which particular problem causes an economic crisis in Europe and the collapse of the EU doesn’t really matter. They’re lined up like dominoes in a circle.

But it is important to stay up to date on each mess. Because it’s the timing of the crisis that’s the key. You need to know when things are reaching a critical stage. And you can do so by subscribing to Capital & Conflict today. We’d love to keep you in the know.

10th May 2018 Nick O'Connor
Alan Greenspan: how financial problems building in the EU banking system will morph into a political crisis that could engulf the entire European project.
Continue reading

The oldest threat will strike in 2018

2nd May 2018 Nick Hubble
Plenty of countries around the world have lots of government debt, lots of bad private debt, and a political standoff. What makes Italy different? Read more
Continue reading

Why the European sovereign debt crisis is back

5th February 2018 Nick Hubble
Of the major economies in the EU, Italy has the worst bad debt problem, the worst sovereign debt problem, and the worst performing economy. Read on for more
Continue reading

29th March 2017 Nick Hubble
How do you know when a crisis is coming? Nick Hubble explains what do you have to mind about Europe's next crisis. Read on for more.
Continue reading

Latest The End of Europe articles

From time to time we may tell you about regulated products issued by Southbank Investment Research Limited. With these products your capital is at risk. You can lose some or all of your investment, so never risk more than you can afford to lose. Seek independent advice if you are unsure of the suitability of any investment. Southbank Investment Research Limited is authorised and regulated by the Financial Conduct Authority. FCA No 706697. https://register.fca.org.uk/.